Salesforce Account Hierarchies are great for modelling global organisations or large corporations with a complex structure and multiple subsidiaries. However, there is a catch in the way the hierarchy is modelled. You might have thought "Great, I'll create all the accounts and then we'll roll everything up the hierarchy". Guess what! You can't really do that out of the box with roll-up summary fields. Rollup summaries are easy to set up but they only work for Master-Detail relationships and the account hierarchy is not built on Master-Detail relationships. There are 2 very popular (and old) ideas on enabling rollup summaries for account hierarchy and lookup relationships [1][2] but, based on the replies from Salesforce, it seems that this functionality won't be coming anytime soon.

There are 3 ways one can work around this.

Each of the methods has its own pros and cons:

These solutions work for the account hierarchy but also for standard lookup relationships between standard and custom objects. In this article, we'll follow method #2 and build a set of flows to tackle the problem. Before going through the solution, keep in mind that we can't trigger flows on object deletion so there is one limitation we won't be able to workaround.

Let's work with a relatively common scenario. You have a global hierarchy of accounts and you'd like to know how the amount of closed opportunities rolls up the hierarchy. Another scenario you might come across are accounts that belong to a holdings company.

There are a couple of things to consider before starting to build our flow. We can roll up the number of closed opportunities to the related account with a rollup summary field. Let’s call that field Closed Deals (Closed_Deals__c). The rollup type should be SUM of the Amount field and we’ll also need to filter the Opportunity records with Won equals True. 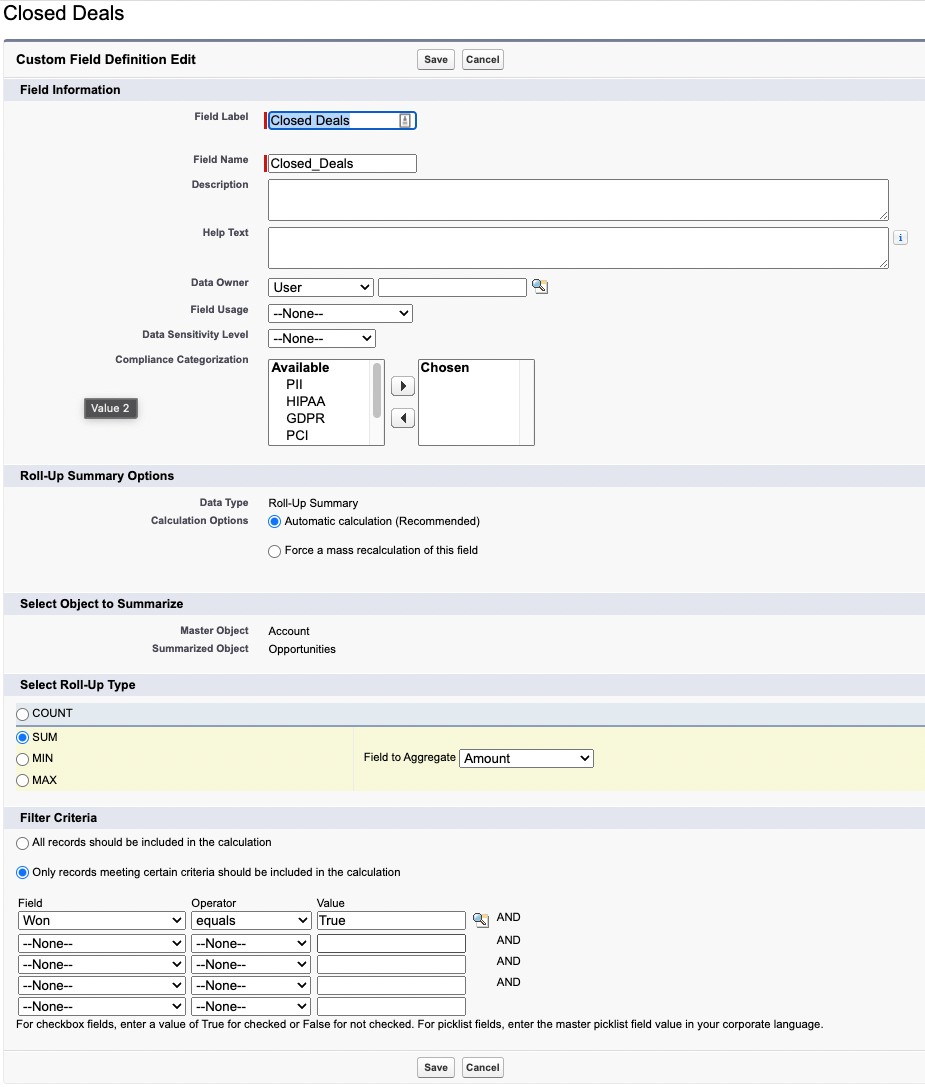 Before starting creating more fields and building our flow, let’s think a bit about how to roll up the Closed Deals field. I have set up an example in Figure 2 to make it easier. 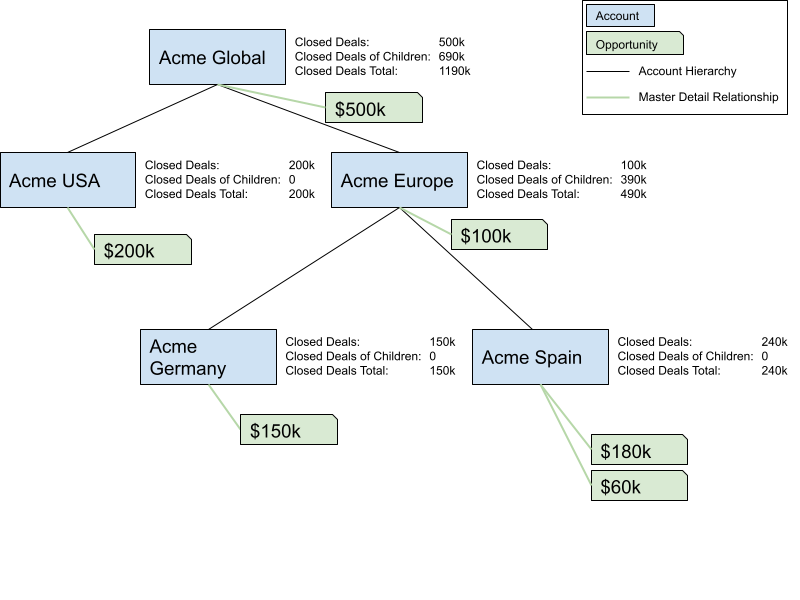 Using the 3 fields that we have defined, we can start building our flow.

Let’s start by understanding the logic of our flow. When an opportunity of Acme Spain closes or its amount is modified, the rollup summary field Closed Deals on the account changes. This change should fire our flow which should recalculate the Closed Deals of Children for Acme Europe. The change in Acme Europe should fire another instance of the flow to calculate the sums for Acme Global. This way all the sums would be kept up to date. The logic can be summarised in the following steps:

This can be covered with one flow but there is one small complication. We have to cover the possibility of reparenting the account. Let’s say that Acme restructures its hierarchy and we want to capture that. If we change the parent of an account, our flow would run for the new parent but “forget” to run for the old parent and update it. This might not be the most common scenario but it makes sense to cover it since we can.

We basically have to call the flow we described earlier one more time for the previous parent.

We’ll build 2 flows: one for calculating and updating the Closed Deals of Children values and one to decide if the parent was modified and we need to run it one more time for the previous parent.

Don't forget to check out: Schedule Your Path in Salesforce Flow | Developer Guide

Let’s start building the inner flow that we’ll call Calculate Closed Deals. Below is what our flow will look like. First, let’s start by creating an Auto-launched flow. We will be able to call this flow from the outer flow when the record is updated.

First, let’s create an input variable for the Parent Account record and name it ParentAccount. Don’t forget to mark it as Available for Input so that the outer flow will be able to pass the parent account record to it. 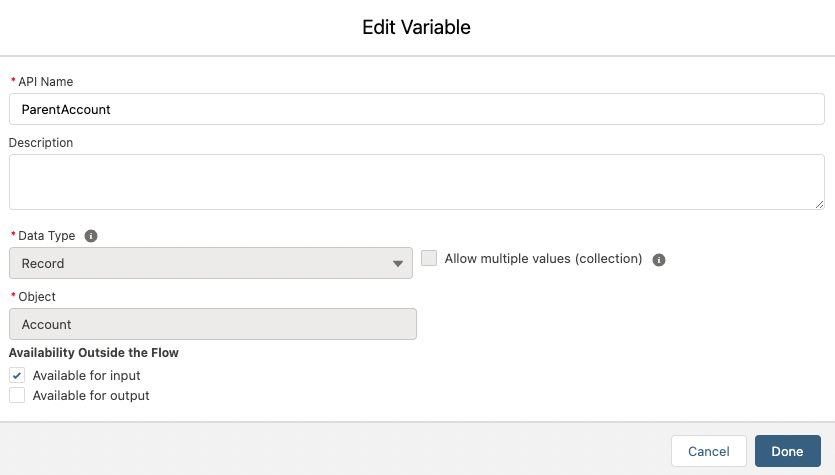 The next step is to get all the children accounts of our parent account. We’ll use a Get element for that. 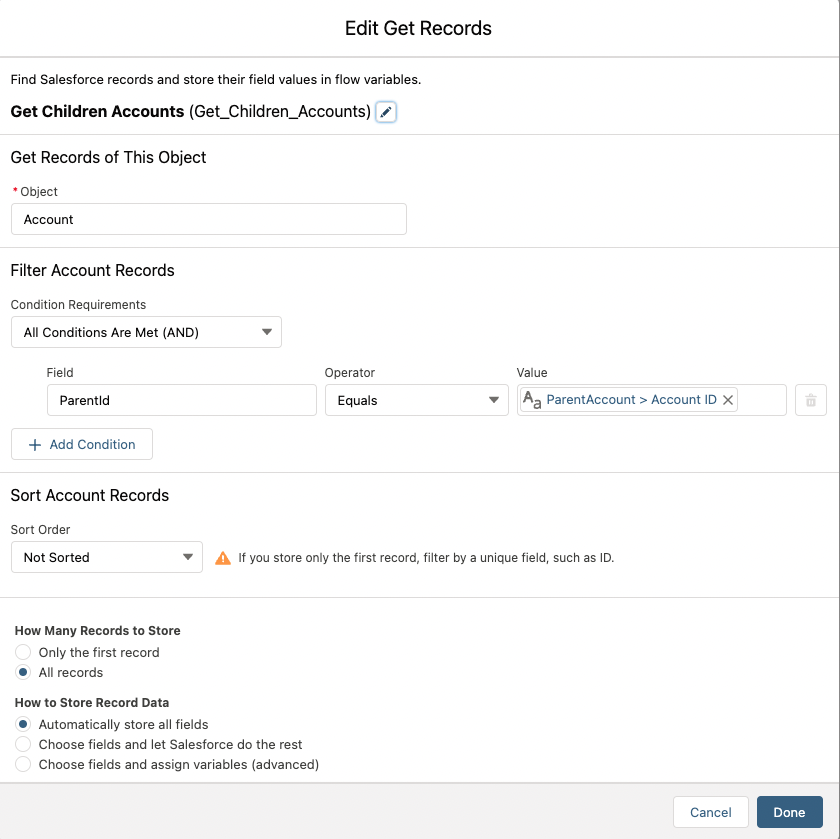 This will create a collection of all the children of the parent account so that we can loop through them. Next, we need to create a loop element to do that. 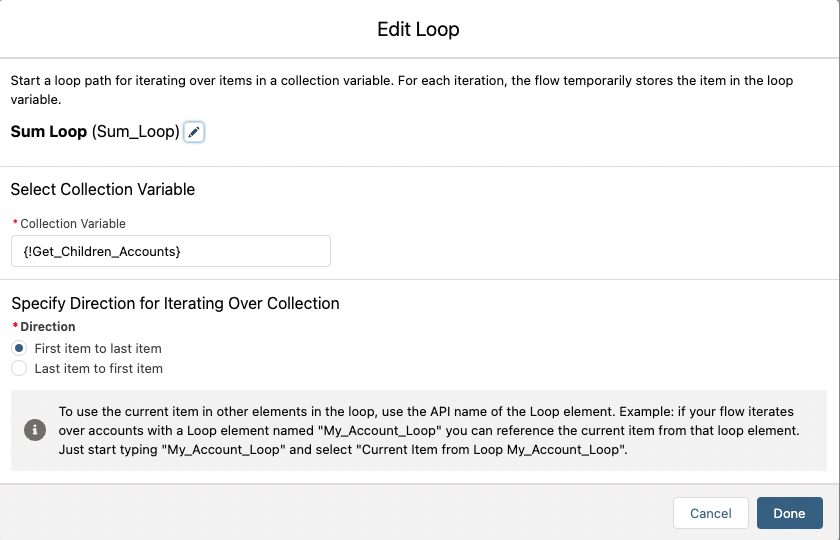 Fig. 6: Loop through the accounts.

At this point, we should also create another variable to store the value of the sum while looping. We’ll create a currency variable called Closed_Deals_of_Children with an initial value of 0.

Fig. 7: Creating a variable to store the sum of closed deals.

Every time we loop through an element, we’ll add the value of Closed_Deals_Total__c of the loop item to the Closed_Deals_Of_Children variable with an Assignment element.

Fig. 8: Add Closed Deals Total from each account to the Closed_Deals_of_Children variable.

Last, we need to update the parent account record in the database. We’ll use an Update element to do that. 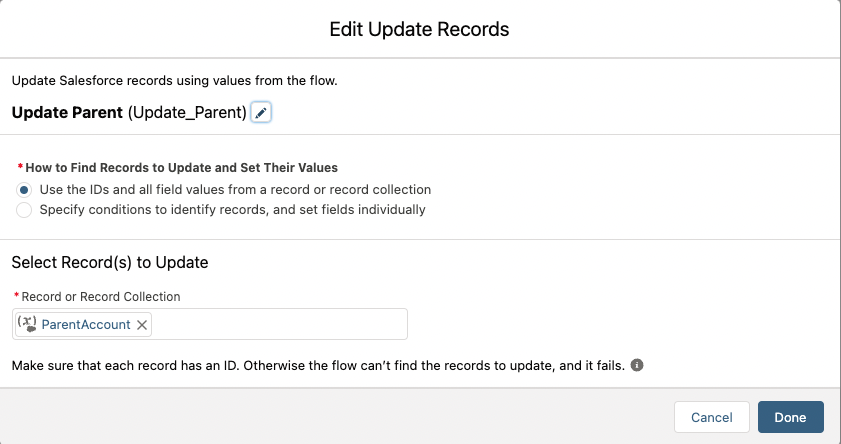 Fig. 10: Update the parent in the database.

Our first flow is done. We can test, save and activate it. All that’s left now is to call it at the right time for the right records.

The second flow must be record triggered and run every time an account is updated. We’ll also add some criteria to make the flow run only when any of the following apply:

We’ll also select the optimise the flow for Actions and Related Records since we want the flow to act on the parent of the account that triggered it and not the account itself. 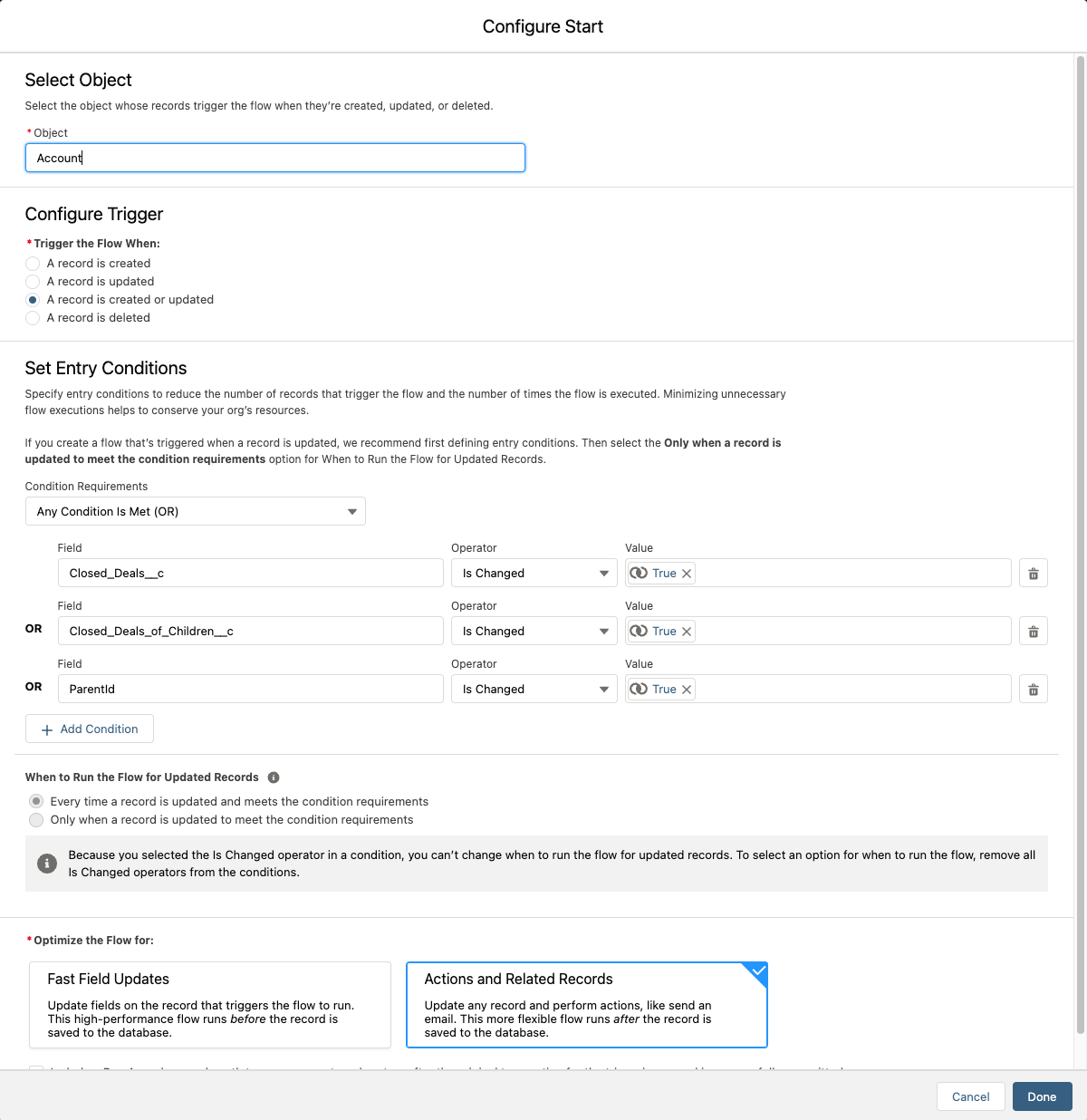 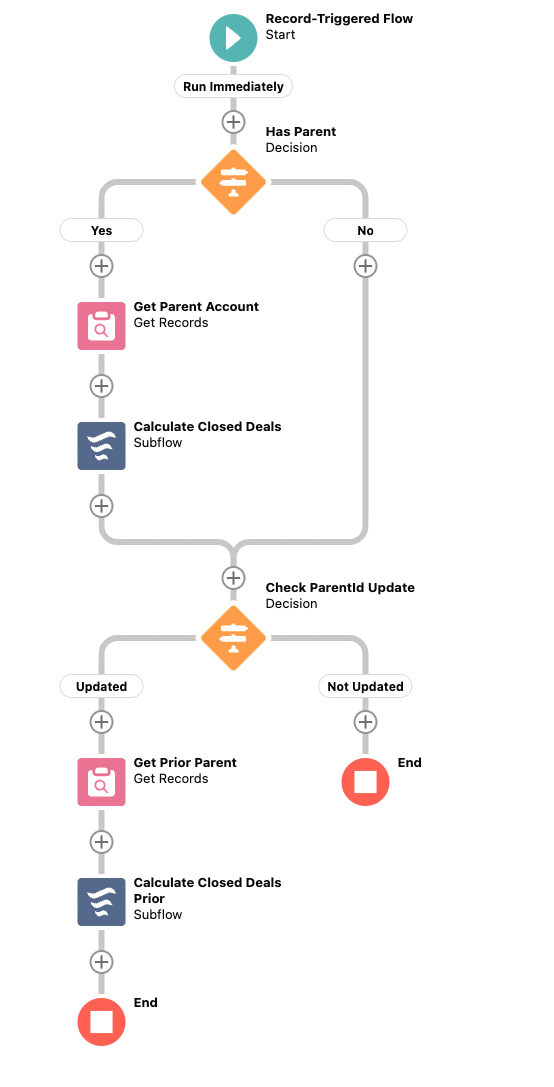 Let’s dive into the details.

First, we’ll use a Decision element to check if there is a parent by checking if the ParentId field is null.

Next, we use a Get element to get the parent account from the database. 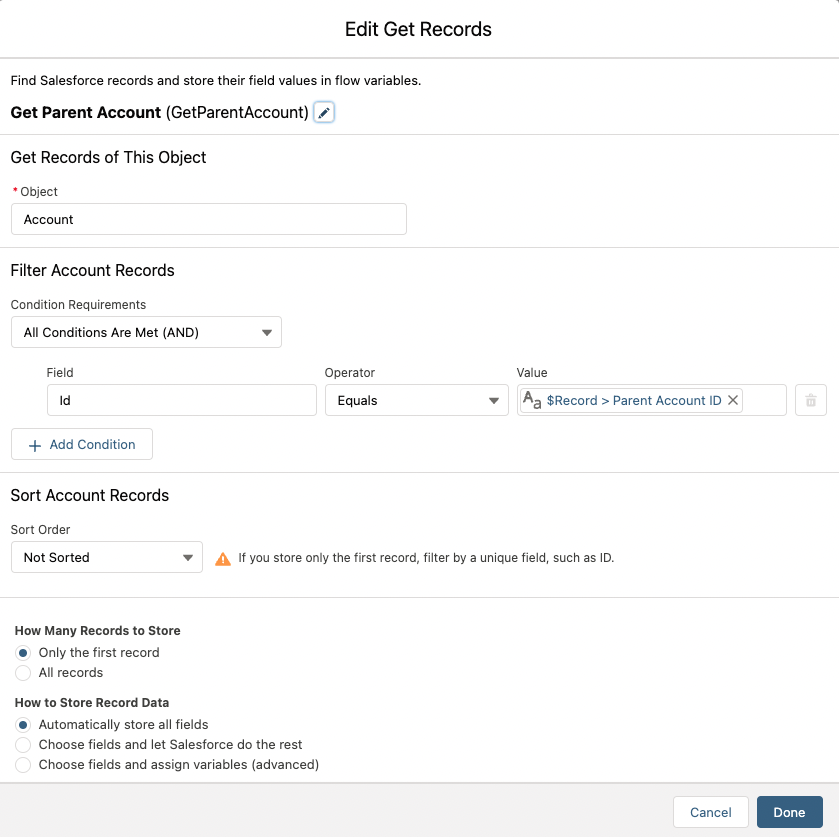 Check out another amazing blog by Vasilis here: Bypassing the “Number of Iterations Exceeded” Error in Salesforce Flows with Platform Events

Now that we have the parent account we can pass it to a subflow element that calls the Calculate Closed Deals flow. Don’t forget to set the input value for the flow. 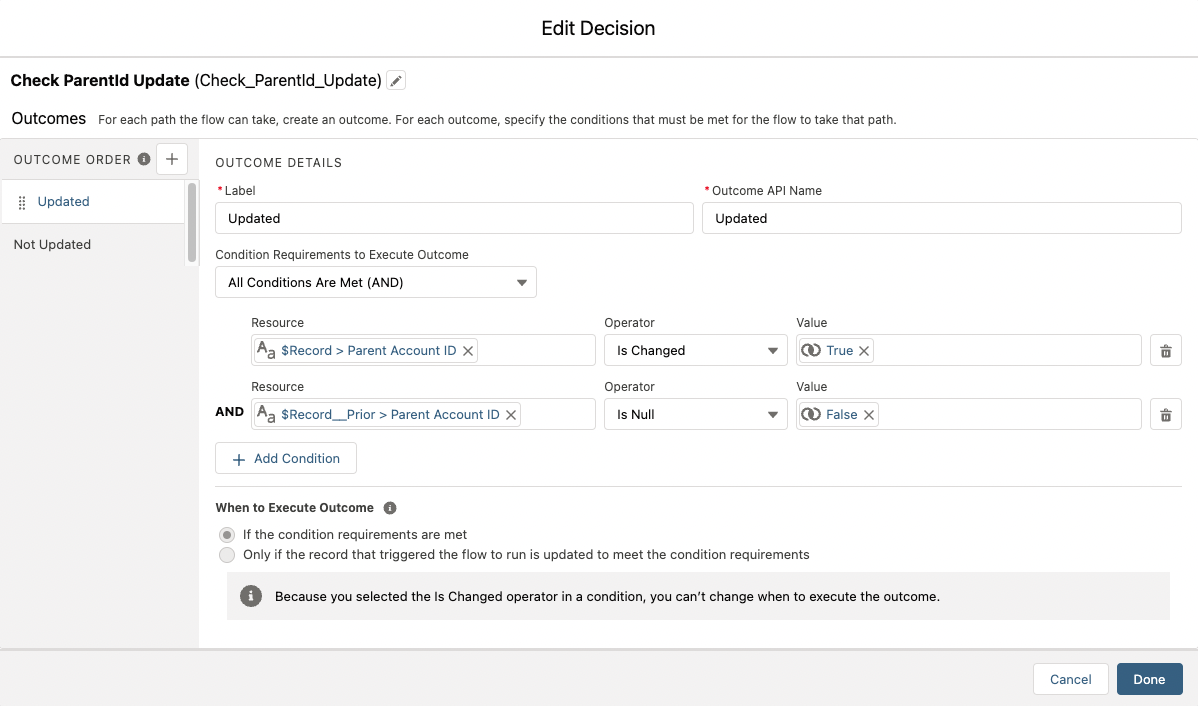 If the conditions are satisfied (Updated path) we’ll have to get the previous parent using another Get element.

Now we can call the Calculate_Closed_Deals flow for the previous parent using a Subflow element.

And that’s it. Our flow is done! Now every time we update an opportunity or account, the account hierarchy is updated. We can also refactor these flows in the future to make them evaluate more than one rollup field since the logic is very similar. The only case that is not covered is when an account is deleted since the flow we built won't be triggered. The rollup summaries that we calculated wouldn’t be correct until another account with the same parent is updated and triggers the process for the parent. If this is not a show stopper, a flow can be an easy way to solve the problem without resorting to development or an AppExchange app.

Vasilis is a Salesforce consultant, developer and Partner at Robin Consulting. At Robin, we provide strategic advice, process definition and technology solutions that help companies grow. 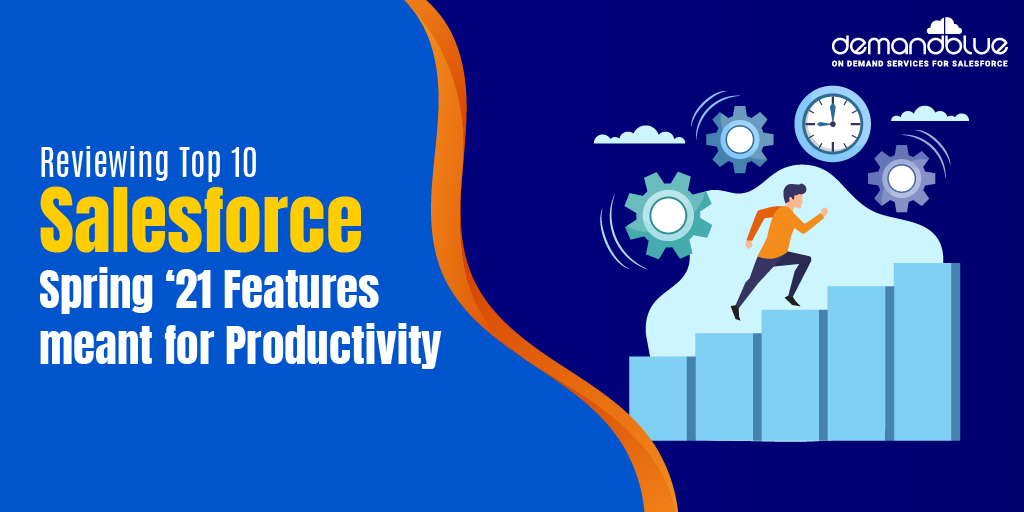 Salesforce has packed great features into their Spring ’21 release. So, let’s go through the top 10 Spring ’21 features that will enhance your workflow… 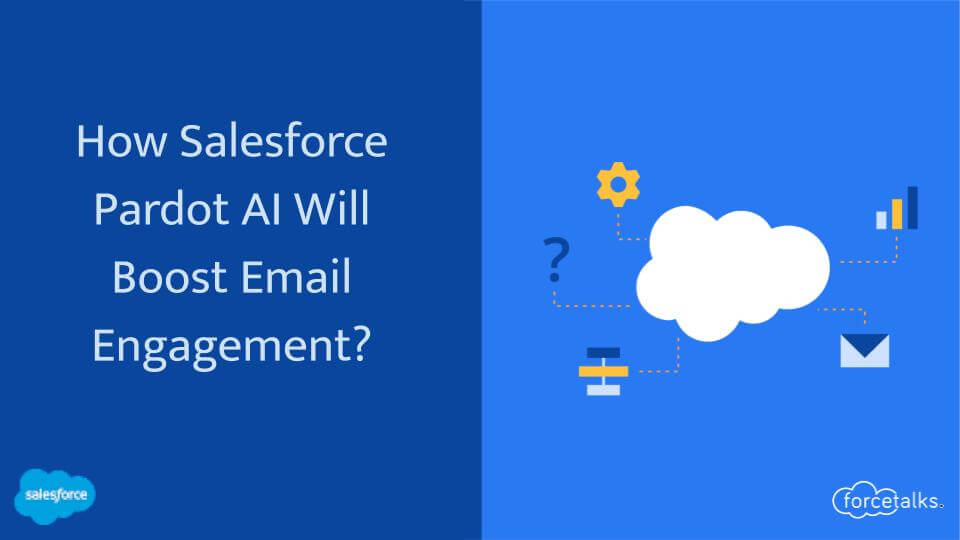 Email marketing is getting more and more competitive with businesses looking to improve their email marketing by increasing the click-through rate (CTR) and conversions. While… 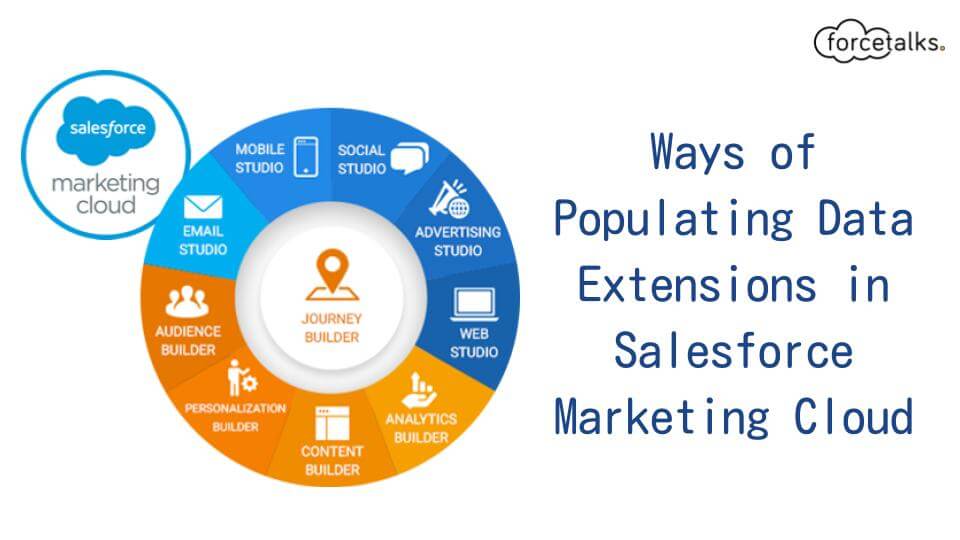 In one of my blogs, I have shared what types of data extensions we have in Salesforce Marketing Cloud. In this one, I am going…

Udit Jul 15, 2021
4,913  Views
Try AuditMyCRM - It is a Salesforce CRM Audit tool which comprehensively scans your Salesforce org and gives you the list of errors or warnings you need to take care of.